I’ve been watching a lot of kid’s movies lately. Miss 2 has discovered the joys of watching Frozen on repeat. Oh. The. Joys. What I’ve noticed is that every movie I put on for her, someone dies in the first 30 minutes. I get it. Death is a fact of life, people die. So I put on The Lion King – dead Father; Nemo – dead mother and siblings; Big Hero 6 – dead brother; Hotel Transylvania – dead mother. You get the picture: dead, dead, dead. Writers, what a bunch of jerks! Yep, I’m one too.

The classical fairy tales are even worse! 3 Little Pigs – wolf is trying to eat them and then falls into a pot of boiling water; Little Red Riding Hood – Wolf eats her and Grandma; Hansel and Gretel etc. etc. etc. until infinity. I understand the original stories are much darker than the watered down fairy tales I read to Miss 2, but sometimes I think it’s all a bit much. Don’t get me wrong I have the original Grimm works, but I’ll give it a few more years before I read them to her. 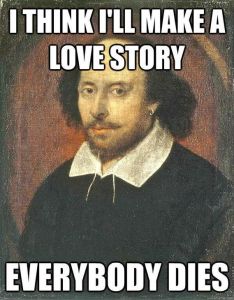 It made me think about stories in general, across all genres and mediums. Are there really any happy stories? Really think about it. Sure, there are happy endings and happy moments but writers don’t set out to write happy stories (exception is children’s books – some of them). Shakespeare didn’t sit down and think, “Oh, I shall end ye Romeo and Juliet with sunshine and rainbows.” No! He didn’t They both died, although it was at the end of the book.

Yeah, yeah I know it’s supposed to be a tragedy. In fact, there is a whole genre dedicated to tragedies. I’ll tell you what there isn’t a genre for, happiness, and do you know why? Because no one wants to read a book about 2 people who meet, fall in love and live happily ever after. The characters need to be tortured, pushed and torn apart to grow. What’s the point if a character doesn’t grow right? No one would publish it, let alone read it.

Even poor Rapunzel, all she did was be born and she was locked in a tower because her mother wanted to eat lettuce. Then the prince shows up (in the original they have a little special private time) they fall in love, the witch tricks him and he ends up blind.

Admittedly I’m only thinking about literature written in English. If there is a book in another language where everyone is happy all of the time, then please bring it to my attention. In saying that I’m horrible to my characters and it’s a wonder that they talk to me at all. The more brutal I am the better the story because it makes it interesting for the reader. Life is hard, no one lives a life that is all sunshine with dolphins shooting rainbows out of their arse. Life is messy and sometimes downright shitty.

I might go on a little fairy tale rant next week, brace yourselves. Sarcasm is coming.

Come on over and friend me on Facebook at Lisa Lancaster.
Come and do some pinning on Pinterest

37 thoughts on “Writers! What a bunch of jerks!”